A year of planning, and many thousands of dollars later, the wedding is over. I am thoroughly (and happily) married. With 4 days, 18 activities, 133 guests, about 20 speeches (most short), 11 vendors, there is an awful lot to remember. I am putting together a collection of photographs (and see Toh’s more extensive set), but I wanted to also record some memories for perhaps the biggest event of my life to date.

Friday Night:
Friday was set aside for “Bachelor activities” (read: “activities Johanna does not endorse”), which turned into a BBQ-sushi for the wedding party, karaoke, and midnight prophesies. Some of the karaoke highlights for me were Mary F.’s enthusiasm during “We are family”, Amir and my “A whole new world” (I got to be Aladdin this time), and all the Flight of the Conchords lovers getting into “Most beautiful girl in the room”.

Saturday:
The day started slow, but when a dozen people showed up for Flame’s aunt’s yoga class, I knew it was going to be good. Friends and relatives helped us put on a day of “ad hoc” activities, including a bike ride, a hike, a walk around Provincetown, and a dance class. I stayed at the wedding party house, instigating games: I taught people Rythmomachy and orchestrated a new game I call “The Ephemera Game”, for people go guess where I got maps and pamphlets.

The wedding rehearsal was were it finally became real. Some 40 people showed up to play their parts or offer moral support, and proceeded to mill around. I don’t know how these things are supposed to go, but someone needed to take charge, so I started directing people. The questions started rolling in: where should we put the chairs, the blessing givers, the grandmas. We had put together a 4-page step-by-step document for the ceremony, and yet there was still so much to decide.

The highlights of the day was definitely “Welcome Event”, organized by my parents. The puttanesca flowed like wine, and the wine gushed like our reconnections with so many people. My step-father began his speech apologizing for not writing one, and then spoke for 20 surprisingly riveting minutes on how Flame and I got together, our travel and take on life, and something about crashing through waves. Then 9 more people came up, with tributes, roasts, and one number for us (the golden ratio, since J^2 = J + 1).

Sunday:
As Sunday began, Flame and I split up for our separate preparations. I drove the groomsmen to the top men’s barbershop in the area for a straight-razor shave: what better way to start my wedding day then a knife at my throat. Flame and I reunited around the bend of a Doane Rock trail, for a clichéd “first look”. Nonetheless, Flame was absolutely beautiful in her wedding gown, and we alternated lovey and silly until I think the photographers had all they could handle.

Our first scare came while doing relatives photos back at the ceremony location. We realized that the ceremony programs, which we had spent hours printing and folding, were nowhere to be found. I was about to derail the photos and send people racing back to the parents’ house, when one of my groomsmen, Amir, said he would take care of it, and then did so.

The other scare for me came as I was waiting at the front of the ceremony and Flame was walking down the aisle. I suddenly remembered Heidi’s admonition that, whatever else happens, I remember to bring my vows; and I remembered that my vows were in my backpack, far out of reach. Then I remembered that Flame had told me to give a copy of my vows to my best man, Toh, the day before, and I wondered if he happened to remember them. I turned and asked him, and he said not to worry, he would hand them to us at the proper time.

The only other ceremony event I only heard about two weeks later. As my sister’s children did their blessing, a commotion of squawks arose in the tree behind us. A hawk had alighted, and dozens of crows and other birds had began mobbing around it. After a couple minutes of this, the hawk picked itself up and flew directly over the assembled people. This must have been some kind of omen (the word auspices actual means to look at birds), with the hawk being a Native American symbol of a guardian, my late father being a zoologist, and my diverse community being all about mobbing. But the interpretation is still unclear to me.

After that came the reception, the hora, the dinner, the speeches, the tosses, the first dance, the dessert, the dancing, and the afterparty. During dinner, we had our special wedding puzzle at everyone’s place (individual pieces and solution), and though no one solved it, two groups made some great progress. Flame threw a bouquet to the tune of Put a Ring on It, and I did a thesis toss to Weird Science. For our first dance, I had taken the choreography from the Ed Sheeran video Thinking Out Loud and adapted it to Flame’s song of choice, Crazy Love by Van Morrison. I had swapped the man and woman parts, and we got plenty of appreciation and laughing. Dessert consisted of the best pies in town and an organic chocolatier, Chequesette Chocolates, which crafted a sea-scape of sugar sand with chocolate turtles and oysters. Even the afterparty was a blast, with 30ish people coming out to hear some live music (we had bribed the band to stay an extra hour) and snacks (including grilled cheeses).

Monday:
After a perfect weather weekend, Monday finally succumbed to the rain, and Linda and Ron’s house became filled with people, love, and brunch. We were saying goodbye until it was time for the hackathon. The Hackathon turned into a brainstorming session, worth its own post.

Finally, here are the acknowledgements for a weekend that was really a labor of love: As Amir said, the whole event went really smoothly: it went off with just one hitch! 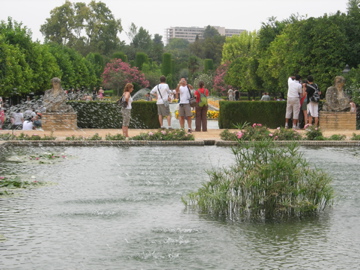